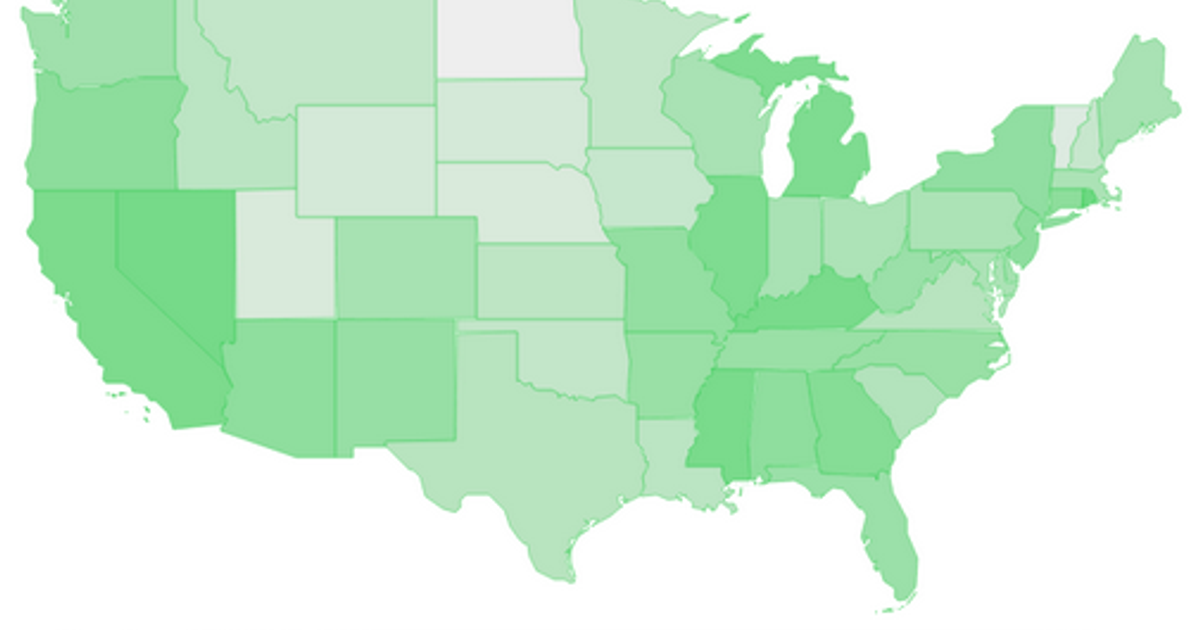 “How is it possible that the brain, a wrinkled chunk of meat and fat squeezed into a cavity too small for its size, can accomplish such challenging tasks?” So begins Alberto Cairo in his acclaimed book, The Functional Art1. How is it that the human mind can possibly be so skilled at processing information that helps us navigate through life? Making comparisons, discovering relationships, noticing patterns, drawing conclusions: there’s something distinctly human about interpreting the information at our disposal to be more effective at what we do. Yet it’s also incredible that human minds can grapple with data at all.

After all, humans aren’t naturally designed to be number crunchers. We barely have enough working memory to remember a small handful of letters, numbers, or words at a given time, let alone the intellectual horsepower to process this information in meaningful way. If you think humans deserve more credit, try the following:

In 15 seconds or less, name the 3 states with the highest unemployment rates, ordered highest-to-lowest:

If that left your head spinning (or if you gave up early), you’ll be relieved to hear you’re not alone. We struggle with deceptively simple tasks like these because they actually involve a number of cognitive steps:

It’s a bit humbling to realize the limits of our working memory while carrying out such a trivial procedure. But while the human brain may not be the best at parsing numbers, it does have advantages when it comes to perceiving information presented visually. Humans are great at perceiving differences in position, length, direction, angle, area, volume, curvature, color, and shade. Cues like position and length are best for helping us quantify amounts while cues like area, volume, curvature, color, and shade are better for making generic judgments about trends or patterns. In fact, you could say the field of information visualization is the art and science of summarizing information using the visual cues that best take advantage of humans’ evolutionary capabilities for processing our surroundings.

Returning to the our question from before, but now using visual cues to help summarize disjointed bits of information, consider the following:

Which visualization below is best for identifying the 3 states with the highest unemployment rates?

1. Data displayed across regions (no cue)

While it’s common to see geographic data scattered across a map simply because it’s geographic data, we have to ask ourselves if this visualization incorporates the cue that is best suited to allow viewers to answer the question at hand. If that question relates to comparison of values and not spatial location, we should avoid using a map entirely. Doing so would only be a distraction. In the example above, we have an immediate answer to our question if we refer to data summarized using the height cue in chart 3.

But which of the above would be best for identifying regional patterns? Are landlocked states more likely to suffer from high unemployment? In this case, spatial relations come back into play. Referring back to chart 2 above, our eyes are immediately drawn to the darker regions of the color-coded geo chart, noticing trends such as the relatively high unemployment rates along the West Coast.

For Cairo, “the first and main goal of any graphic and visualization is to be a tool for [the] eyes and brain to perceive what lies beyond their natural reach.” It’s up to the information designer – anyone structuring, visualizing or presenting data – to anticipate the natural cues humans will use to perceive the information that is being designed and use these cues to pass on information most effectively.

This article is the first in a multi-part series on data visualization.